Perfect Cruise…Off the Somali Coast. Free Upgrade to a Balcony Room with Bazookas.

Of course this is snarky. Click for the FULL PACKAGE Enjoy your cruise 🙂 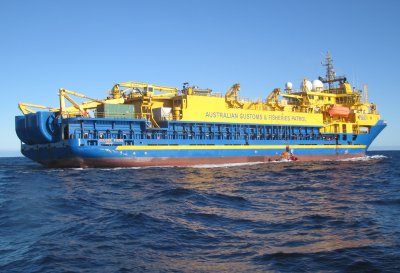 I heard it today, Barack got a prize
Seams theyre dishin peace, prizes left and right
If you wanna prize, you can do it to
Theres just a few things, that you gotta do

They gave a peace prize, to our president
Hed only been prez, for two weeks by then
The same time he takes, to dust his smokes
Some people call this, nobel prize a joke
But remember yall, Big O gives us hope
More hope for all man, even for the pope
This award aint for, anything he did
But for things he promises that he will
The first man to win, a peace prize for hope
Bankrupt America, The man is dope
Obama wants change, see it in his eyes
If you do to, youve earned yourself a prize

The Nobel prize, aint given to fools
The whole committee, Went to greater schools
They thought Barack, Was Nobel worthy
they decided to, look at his story
He was voted to, be our president
Then they closed the books, The man is in
His namell go down, with other cool cats
Al Gore, Carter, Yasser Araffat
The prize aint always given to the best
Its got to be, politically correct
Thats why its not, everybody wins
For what not to do, Take a look at him

To all my friends and relatives……. 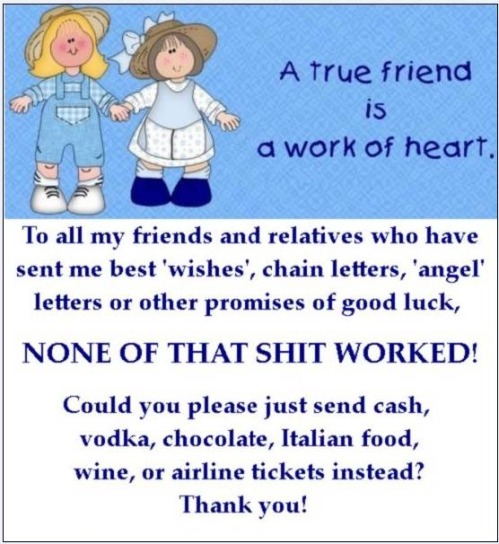 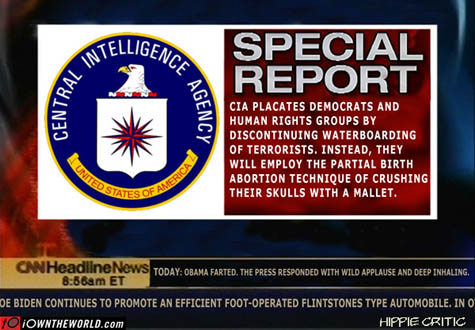 Comments Off on CIA News Breaking from iOwnTheWorld.snark 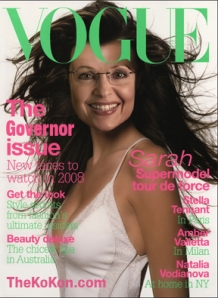 NRO’s Victor Davis Hanson rounds up the top news stories from President Palin’s young administration and the horrific direction she’s taking our country. OMG! Thanks to our free speechifying media for doing their jobs and keeping all Americans informed, it’s not too late to stop this mad woman destroying our country ! So grab your teabags, anti-war signs, code pink costumes, petitions, laptops, crackberries, cell phones, tweets and join me and other patriots in solidarity to take our country back! Oh wait…..

LET THEM EAT MOOSE
“Ted Stevens may have gotten off,” wrote Bob Herbert in the New York Times, “but he taught our Sarah something first — like using $100-a-pound beef for her state dinners. And what’s this $50 mil for her inauguration gala? Since when do you fly in your favorite pizza-maker from across the country on our dime? Or send the presidential 747 for a spin over the Big Apple for a third-of-a-million-dollar joyride? Does Palin think she’s still in Alaska and has to have everything flown in from the South 48 by jumbo jet?”

WASILLA CHIC
Also in the Times, Gail Collins weighed in on the already-tired yokelism of the new commander in chief. “What we’re getting is Wasilla chic. That’s what we’re getting. She arrives in the Oval Office, and first thing sends back Blair’s gift of the Churchill bust as if it’s a once-worn Penney’s outfit. Then she gives the Brits some unwatchable DVDs as a booby prize — as if she idled the old Yukon and ran into Target’s sale aisle. Did Sarah send Bristol into Wal-Mart back in Anchorage for that ‘engraved’ iPod for the queen? And what’s this don’t-bow-to-the-queen stuff, but curtsy for a Saudi sheik? Maybe that explains why she brags to Stephanopoulos about her ‘Muslim faith.’ So far, the best things going for her are Todd’s biceps.”

IT’S THE MATH, STUPID!
“Well,” lectured Paul Krugman, again in the Times, “we were worried that they didn’t teach math at Idaho U., and now we know for sure they don’t. Is it $1.6 trillion, $1.7 trillion, or $2 trillion in red ink this year? Are we supposed to be impressed that she offers ‘fiscal sobriety’ by cutting 0.003 percent of the budget? She gives out money to those who don’t pay taxes and calls it a tax cut. And now Queen Sarah tells us that in four years she’ll ‘halve’ the deficit, as if she hasn’t borrowed another $5 trillion in the meantime. Does she think we’re morons? How many ‘Drill, baby, drill!’ oil wells can she tap into up there in Alaska to pay for the extra $11 trillion in debt she’s saddling us with?”

WORSE THAN ‘NUCULAR’
ABC’s Katie Couric summed up the general disappointment with the president’s communication skills. “I tried to warn the American people in that interview a few years back what they would get if they voted for her. Let’s face it: She’s a walking embarrassment. I mean just count ’em up: The mayor of Wasilla thinks Austrians speak some lingo called ‘Austrian.’ Then she tries her hand at Spanish and comes up with some concoction, ‘Cinco de Cuatro.’ Next thing she’ll walk into the window of the Oval Office and expect it to open — oops, she’s already done that. No wonder that when her Teleprompter stalls, she shuts her mouth until it catches up. I’m surprised she managed to get sworn in. And did she think that tasteless ‘Special Olympics’ slur was funny? Or making fun of octogenarian Nancy Reagan’s séances? No wonder Wanda Sykes feels at home.”

…..but I totally get this now 🙂 Democrats on an Escalator……..perhaps on their way to President Obama’s budget meeting?

Better yet, perhaps members of the media on their way to file another report on those White House parties! 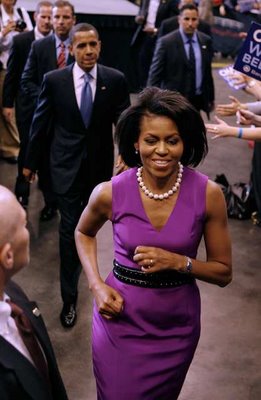 I kid you not, this is news for dumbbells

But others were amazed, like 25-year-old Jessie Rosen. After seeing Obama at the speech Tuesday, she went to the Adidas store in New York and bought two five-pound dumbbells. “It was her arms being so toned in spite of her life,” she said.

“This woman is redecorating White House, trying to raise two children and backseat driving the nation,” Rosen said. “She seems to have time to keep her arms toned, so why can’t I?”

Told ya it was about dumbbells, because later in the article, there’s just a little more involved than 5-pound weights.

So how does a normal woman, who doesn’t have a personal trainer or healthy meals from the White House chefs, get tight and taut biceps?

Michelle’s not normal ? I knew it ! LOL. Read the rest of the article with a box of donuts, works just as well for me 🙂 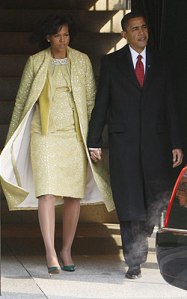 I love Michelle, but today, not her fashion choice. I think my alter-ego at Capitol Hill said it best:

But the catty bit*h in me absolutely hated Michelle’s recycled Laura’s powder room drapes outfit. REALLY?Lemongrass brocade and lace? What was girlfriend thinking? Don’t get me started on the pea green matching gloves and shoes. I have a 52 inch HD LCD XYZ TV, and I could take my eyes off the NEW JACKIE O FASHION LEADER! So sez the media, but I digress.

Michelle is a lovely woman, but would have loved to see her in a more flattering Hillary tailored number today, which would match the event. Striking and TALL, I think she would have looked FAB (Mary Quant mod? with contrasting trim?) in a tailored double breasted full length coat with some kickass boots with a chubb heel for walking and stair climbing….sorta like this? 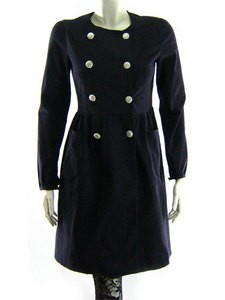 And a hat! Her hair was out of control ! A little “Carrie Bradshaw” edgey would have been welcomed today. You can hate the color, or you can hate the style, but not both.

But in the spirit of the day, we have your back FLOTUS

Most of us can’t afford $1500 designer duds for one event, and unless it’s appearing on your personal bank card, I have every right to to my personal snark 🙂