Two Mommies and a Tabloid

Who let Michelle Obama, who allowed her daughters, to appear on this rag cover?

Uhm, then who was behind the Palin Smear Cover?

Change we can believe in ? I don’t think so 😦

Sort of an Update(02.03.09) In case you missed NBC’s Matt Lauer’s interview with PBO on Super Bowl Sunday, you may have missed Mattie bringing to the attention….to an entire pre-Bowl buzzed nation….that indeed Ms. Simpson’s “weight problem” photo deleted Obama’s face off the cover! On close observation, yes you can see part of his white shirt sleeve. Thank you Matt for covering the First Family like you were a 3rd string reporter for a high school newspaper and forcing the President to acknowledge Jessica Simpson seems to have a weight issue ! Puh-leeeze. Can we have a little class?

Of course, this dish is from my favorite N.Y.Post’s Page Six, and probably with more credibility than the NYT these days.

OPRAH Winfrey wants to be as close to Barack Obama as possible. Insiders say Winfrey has started a preliminary search for a home in Washington, DC. A nine-bedroom Georgetown mansion she’s said to have asked about is listed at $50 million, but another source said, “She has never personally been to see it.” We’re sure Winfrey will try to swing by during Inauguration week. Her rep didn’t return calls.

Hmmmm, what else could 50 million buy in D.C. Maybe a Girls Leadership Academy (40..cough…million…dollars)? Girlfriend doesn’t need another house to be close to The One, afterall, there’s probably a permanent room for her in the White House as a Thank You for being THE 2008 Primary Game Changer?

Here’s what 7.3 million will buy in Georgetown/DC, as featured in Forbes 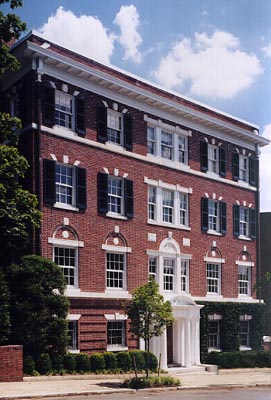 Imagine what 50 million would buy !? I hope it’s not another house, but an investment for those beautiful children in Washington D.C.