Yes, You Should be Concerned About Union Thuggery! 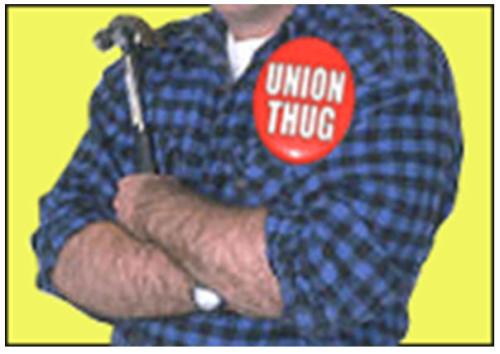 One of my favorite political playgrounds on the internet is The Conservative Cave community board, where I was embraced as a recovering liberal after BarryO’s election. After 4 years of slumming on Democratic Underwear-and-Daily Kossack Pinko areas, I honestly think Obama’s WTF 2012 started for me in 2008. I know I’m not alone. First came the PUMAs, then the Tea Party, the Good Dems escaped, especially from media lapdogs like Chris Matthews’ tingles and Keith Olbermann’s spittles. Life was good again. Conservatives are the heart and soul of America, the left, my “former” friends, are trying to destroy her.

Back to the CC community, and a gracious thanks to poster *5412* for allowing me to share his views on Unions, in full.

The true worth of anyone in the job market is based on a fundamental economic law, supply and demand. If there were another 100,000 heart surgeons in this country, it would be a lot less expensive. Like it or not, top professional athletes are paid a ton of money because there are very few of them that can perform at that level. If you want to earn a good living, go into a field where there is tremendous demand for what you do with little competition in the labor market, plain and simple.

In my lifetime I have gone from generally pro union to the opposite and here is why. In the early days unions struck for fair wages and good working conditions and indeed there was a real need to do so. Corporations basically controlled the labor market, many treated their workers shabbily and they got what they deserved. The good news is at least most all of the sweat shops in the US are long gone.

Now the unions basically did not stop, each and every contract they kept demanding more and more and the fool corporations gave it to them. GM, Ford and Chrysler at one time had almost 100% share of the US market and they felt as long as they all three paid basically the same wages, they could raise the prices of their cars and still compete on a level playing field with one another. The management of the big three took the easy path and made economic commitments they could not keep down the road, much like our government has made commitments they cannot keep. Well it took a couple of decades but soon foreign competition came in with much lower labor costs, and most of all lower pension, retirement and other costs. They made quality products and priced them a hair under the US products and pretty soon they had a good chunk of market share and making a ton of money in the process. I forget the exact figures but it was something like $2,000 of the cost of every GM automobile goes to pay benefits for non working union members; while Toyota pays something like $400. The ratio was huge and no matter how much you may not like it, American automakers just have a tough time competing.

Multiply that effect on most manufacturing companies in the US and pretty soon all the jobs started moving offshore. If one is a laborer in an auto plant, glass plant, plastics plant….etc. and there is a tremendous supply of foreign workers that can do the same job for a fraction of the salary that is paid in the US, like it or not the law of supply and demand will kick in and pretty soon there are no more jobs. Add the stupid government regulations, unrealistic environmental laws etc. and it is no wonder corporations are moving jobs offshore as fast as they can. You can blame the greedy corporations all you want but they are trying to survive in a worldwide competitive marketplace. The union leadership understood that but did not seem to care, they just kept demanding more and more until companies were forced to move jobs offshore.

Before I retired, I was a consultant having worked with 40 of the top 500 US corporations as well as a lot of other smaller companies. I lost count of the number of times I knew of where management gave the unions their best offer in a contract negotiations and meant it. The union leadership was shown the books, told if they did not take it they would be forced to do something they did not want to do, close up the plant and move offshore. The union called their bluff, the plants were closed and the jobs were lost forever. I knew of dozens, if not a hundred cases where that scenario took place. In most cases it was pretty clear, if the company agreed to the union demands they could not compete and would go bankrupt, or they spend millions to open plants somewhere else so they could stay in business. The union leadership sold out the rank and file time after time.

So what do we have left? We have a system where unions collect union dues, waaaay to much, then buy a political party, who gladly accepts their money so the individual politicians can stay in power. There was an analysis going around the internet that showed unions contributed something like $50 million to republicans in 2010 and $450 million to democrats. Ummmm, pardon me! All concerned, including the poor sap who is paying dues, would be better server if they took the entire $500 million and reduced everyone’s union dues. If the membership wants to contribute let them do so on their own. We would all be better off.

Wonder why it is that the states that have the highest % of union membership, and long standing democratic leadership, are the ones on top of the bankruptcy list? It cannot be just a coincidence.

Personally, as a conservative, I have little problem with the rank and file, heck I have been a member of a few unions myself over the years. My problem is the disconnect between their leadership and reality. As Andy Stern said, they will use the power of persuasion and if that does not work, then the persuasion of power. Umm, pardon me! What that means to me is screw the will of the majority, screw the rule of law, we are going to bully our way to get what we want and we see evidence of that in the state of Wisconsin.

Want an example. GM should have been allowed to file for bankruptcy. BO did not want that because then the union would have to negotiate in good faith. Instead they totally violated the law, screwed the bondholders and gave the company to the unions which was totally illegal. The bondholders were basically bullied into submission with government threats.

The Boeing situation is just the tip of the iceberg, a symptom of a much bigger problem. The unions own the democrat party to the point they are willing to break the law to pander to them for their campaign contributions so they can stay in power. That is a very dangerous situation, one that can easily lead to communism.

Don’t let the bullies win ! Thank you again *5412* for letting me share your thoughts 🙂

I was always surprised that California voters passed Proposition 8, yet overwhelmingly voted for President Obama. Could it be the “swing” voters were ACORN and the union people? Oh yeah, vote for the guy who’ll give you stuff, but no help for the GLBT community who helped put your guy over the top? Hypocrites.

Also, the youtube comments section has an interesting discussion of the video.