There is no cure for “stupid” ! Photoshop the damn “beefcake” photo-op plane over NYC next time!? 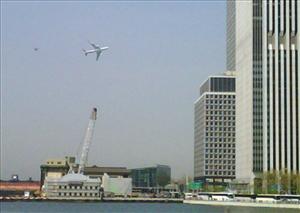 The primary presidential aircraft, a Boeing 747 known as Air Force One when the president is aboard, flies low over New York Harbor, Monday, April 27, 2009. (AP Photo/Jason McLane)

Let’s start with Senator Chuck Schumer (Dumbass-NY) for blaming the FAA for flying the Air Force One backup plane with a fighter plane trailing it over NYC today at a very low altitude making many New Yorkers crap their pants.

The Federal Aviation Administration and the Air Force say the flight was a government photo opportunity and training mission involving a presidential plane.

The White House staffer who organized the photo session apologized, but not before locals and an influential senator raised their voices.

Worried workers from several office buildings poured out onto the streets before they learned that the flights were harmless.

John Leitner, a floor trader at the New York Mercantile Exchange Building, said about 1,000 people “went into a total panic” and ran out of the building around 10 a.m. after seeing the planes whiz by their building, near the World Trade Center site.

“Apparently, nobody in the building was informed that this was going to happen,” he said. “Everyone panicked, as you can certainly understand.”

Then Press Secretary Robert Gibbs fumbles the ball too, per ABC News:

At a White House press briefing Monday afternoon, White House Press Secretary Robert Gibbs dodged questions about the flyover, even referring the media to the White House (that he represents).

Gibbs said he had no other information about the flyover other than news reports he had seen. “I was working on other things,” Gibbs said. “You might be surprised to know I don’t know every movement of Air Force One or what happens to it.”

Everything’s hunky-dory then? Not so fast….

“It didn’t sound like a fun meeting,” the White House official said.

Although the shoot was authorized, the normal system of public notification broke down, multiple officials said.

The DOD would not answer specific questions about the promotional flight.

Bloomberg said he was so furious he wasn’t told about the photo op, that before he talked further to his own staff and agencies about the lack of notice to him, he wants “to calm down.”

“Poor judgment would have been a nice way to put it,” Bloomberg said of the government flyover.

And the White House apologizes.

A lowly staffer takes the fall 😦